← more from
Art As Catharsis
Get fresh music recommendations delivered to your inbox every Friday.
We've updated our Terms of Use. You can review the changes here. 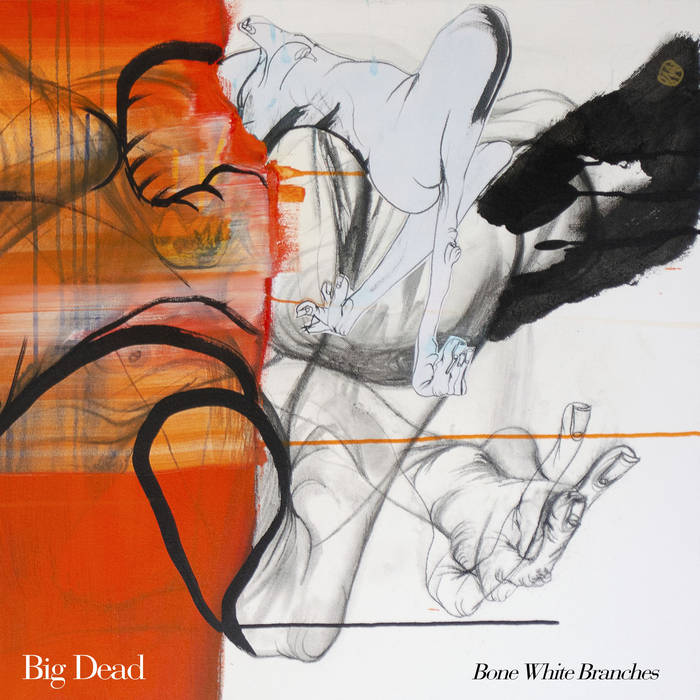 Over the course of Bone White Branches, Big Dead share their love for Jaga Jazzist, Cinematic Orchestra, Radiohead and Tortoise, as shown through their ambitious compositions and expansive instrumental work. Tying things off comes vocalist Cam Bower’s love for Tom Waits’ lyricism – Bower successfully toys with realism and confusion in the lyrics he writes and sings, adding an extra layer to the complexity of the music. The result of Big Dead’s efforts, coming 10 years since their first EP, is a record of mature slow-rock jams that invite the listener to pay close attention to the intricate instrumentation that subtly textures each song.

“The themes on Bone White Branches are quite varied,” begins Bower. “One of the tracks is about a mate we lost, another is about not losing a friend too soon. There’s the usual human drama/relationship stuff but I suppose we tend to dress most of that up in metaphor and ambiguity. Some of the lyrics are total stream of consciousness and some of them are laden with meaning. Generally we want people to make up their own mind about what the songs mean. Sometimes the most important meaning music can give us comes from a place which is deeply personal, and I think even to us in Big Dead each song means something different. We don’t want to tell people what to think about the album. People make their own stories up.“

The first single from Bone White Branches is Heart and Brain. Touching on the elements of love vs rationality, Big Dead uses mellow chords and warm vocals to guide listeners through a thick, heady jam. Acoustic guitar sweeps in from the corner of your hearing, fluttering synths, bass clarinet and clean keys seep in through the cracks; it’s a song full of delicate curiosity and serves as an excellent example of Big Dead’s careful approach to song writing.

“It’s a song Josh wrote in 2009 or so, and it was revisited in 2016/2017,” says Bower. “The lyrics are written about the questioning of romantic relationships, sexual identity, existence and repetition of behaviour. The song is sung from the point of view of one person, but it’s thematically dealing with two perspectives. It’s definitely one of my favourites on the album. Brendan Cox (the mixing engineer for this one) did an amazing job - I remember sitting in my studio hearing that B section for the first time and getting mega chills. I could never get it to work right, but he nailed it. It was a really wonderful experience giving our music away to someone else to mix again. The last EP was mixed by myself (Cam) and Lachlan (Clarinet, Bass etc) in our studio.”

Previously performing opening slots for Tortoise and Knower, Big Dead are easily proving their musical ability is worthy of attention on Bone White Branches. The heave and sway of the album has an uncanny knack of getting under the listener’s skin while the sheer level of craftsmanship shown on each song of the nine track album paints an overall picture of careful genius. As far as alternative Australian music is concerned, Bone White Branches is easily one of the most careful, thought-out and artistically galvanised pieces of 2019.

Dedicated to the memory of our friend Marty

Special thanks to Rohan Seekers, Matt Hoffman and Eri Kimura (thanks for letting us invade your house for a few months), Jessi Dunbar, Sam Maguire (and everyone at GCR). To our partners, Kellie Holt, Kelsey Muhleisen and Billie Bower, Jess Bain, Jade Shanley for their love, support, help and patience in bringing this album together. Thanks to Jake Miller and Brendan Cox for their ears and Andrew Fincher for his extra hands and his Rhodes. Big love to the Australian music communities for feeding our hearts and our brains.

This Brisbane five piece bring a kind of world-weary abandon to their particular brand of jazz-infused rock. Big Dead’s music evokes that sombre, heavy-lidded romantic postlude - mementos more sedated slow burn than agitated recollection. At the heart of Big Dead is a take-no-prisoners musical ambition, eager to hurl the listener from chaos through to catharsis. ... more

Bandcamp Daily  your guide to the world of Bandcamp

Guests John Beltran and Kim Myhr walk us through their magical musical adventures.